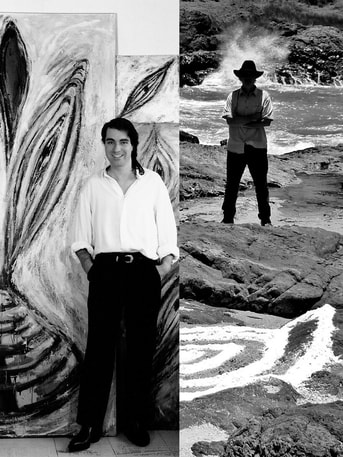 Gerry Joe Weise, Australian Land artist.
Gerry Joe Weise was born in 1959, on April 23rd in Sydney, Australia. He is an award winning visual artist, who has lived and worked in Australia, France, Germany, Switzerland and the United States. He has exhibited in over 80 solo and group exhibitions across the globe. He is a professional photographer and an accomplished video-maker, all for the sole purpose to further his artwork, which he has exhibited since 1980. He is also a musician, and has performed professionally at musical concerts since 1976. He is best known for the following categories: Environmental Art, Earth Art, Land Art, Installation Art, and "In Situ". His drawings, paintings, sculptures and photography; can be found in many galleries, museums, cultural centers, private and public collections, around the world.

Techniques. Weise often uses natural materials such as earth, sand, mineral, stone, vegetation, and pigments. Choosing to situate his work among inspiring landscapes, he transforms the way we behold and view a land site. Causing us to pay more attention to minute detail, of certain forms and perspectives that make up an environment. His aim is to be in total harmony, and serve as a compliment to the natural surroundings. Never disrupting, but forever paying tribute to this green blue planet. Weise's artwork outside, in forests, at beaches, among rocky shores, or on green grass, often fall subject to the cycle of seasons. The tides, wind, rain, sunlight, and decay, all serve to transform and erode his work. Ephemeral Art has captivated him for a very long time, as he finds it is another way of gauging time, from past to present to the future. Some of his tidal works with Sand Drawings disappear within less than 12 hours, but that does not stop the production of photography and printing. There are also the preliminary sketches and drawings before the act of creating an installation outdoors. For most of his themes and concepts, there is a body of work capturing the before, during, and after process. Weise’s Environmental Art is never as fragile as we might expect. He has said his artwork can be summed up as, “expressionistic earthworks on land environments".

Environmental Art branched out from Land Art during the late 1960s. Both are parallel movements that question the power and authority of museums, art institutions and galleries. Historically in the past, museums and galleries have always controlled the production, exhibitions, and sale of artworks. By creating Environmental Art at outdoor locations, in sympathy with nature while blending in with surrounding landscapes, can only lead to unique and surprising results. The artist removes the power from art dealers and the general art market. The emphasis is (always) on the process of creation, and the artist's concept. The artworks are often ephemeral (but not always), and an immediate audience is not necessary, as most artists prefer to work alone with and in nature. A one-on-one harmony and artistic experience. What survives is documentation, mainly photography of the site. Maps, videos and other media can be added too, as the Environmental artist becomes an archivist for the created outdoor installation.  (Albert L. Sandberg).